As a naturopathic doctor, I regularly see the proof as to why having a healthy diet and eating the right foods is an important part of maintaining a healthy lifestyle.

Knowing what to eat and what to avoid, though, can be tricky.

And no wonder it’s so confusing. There’s conflicting information everywhere you go. So-called healthy options are anything but. Fat doesn’t make you fat? And fat-free options can make you fatter? What’s going on?

On top of this, there are all sorts of so-called experts telling us what we should and shouldn’t eat. But what does the science say?

Today, we’ll break down some of the worst foods for your health, why they’re so bad, and give you alternatives to reach for instead.

Keep reading to learn more about 5 common foods which you should avoid.

Although a favourite for many children, and a staple of the classic “PB&J”, white bread is something which should be avoided.

White bread is highly processed. It’s made from refined flour, which is lacking many essential nutrients. It’s also low in fibre – one of the benefits of bread.

Because of its low fibre content, white bread is rapidly digested which can lead to spikes in blood sugar.

When looking for the essential building-blocks of your next sandwich, ditch the white stuff. Instead, reach for whole-grain bread.

Agave is often marketed as a “healthier” alternative to honey. This is because it has less sugar, calories, and carbohydrates than honey per serving.

Also, it contains some vitamins and minerals which honey doesn’t, such as vitamins E and K.

But though it has its benefits, it’s not the healthy alternative many make it out to be.

A 2012 study in the Journal of Agricultural and Food Chemistry looked at the nutritional profile of 19 different agave syrups.

The study found agave to be incredibly high in fructose. It has a concentration of nearly 85%. By comparison, even high-fructose corn syrup is only 55%. And it has “high fructose” in the name.

There are natural and low-and-no calorie sweeteners you can reach for, to get added sweetness without the calories. Erythritol is a sugar alcohol which has only 6% of the calories of sugar, but 70% of the sweetness. Another great option is stevia, which comes from a plant – and could even be grown in your home. 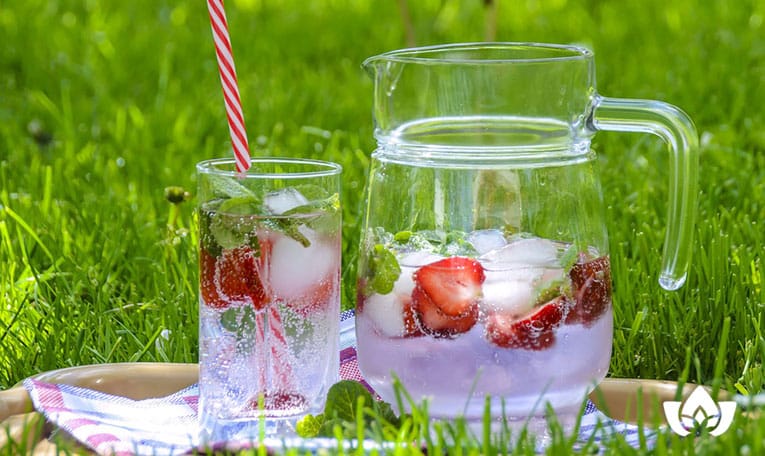 This one won’t come as a surprise to most people. Drinks filled with added sugar, such as juice and soft drinks, are not the best option for hydration.

A 2007 study in the American Journal of Public Health reviewed the effects of soft drink consumption on public health.

They found a clear link between the consumption of soft drinks and increased body weight. In other words, the more soft drinks you have, the more likely you are to be overweight.

When you get your calories through juices and soft drinks, your body doesn’t register them the same way as it does solid food calories. As a result, it’s easy to drink far more calories than you realized.

The best thing you can drink is pure water. But drinking nothing but water all the time can get boring.

Adding fruit to water can add flavour. You may have seen lemon or cucumber water offered at your favourite spa. Soda water is a great option for people who still want a little “fizz”.

Coffee and tea can be great options as well. Just watch how much sugar you are adding and do not add sugar or artificial sweeteners.

Some types of yogurt can be very good for you. But just because it has“low fat” on the label doesn’t mean it’s the best option. Fat is not a bad thing. Healthy fats are an important component of a balanced diet, but many of us have been led to believe fat is the enemy.

Often times, when yogurt is low fat, it means extra sugar has been added to improve the flavour. While natural fats are healthy and an important part of a balanced diet, sugar is something which should be avoidedlimited. Also, in pasteurized yogurt, much of the beneficial bacteria which can be vital for a healthy gut has been killed off.

This one is easy – skip the low fat yogurt in favour of full-fat yogurt which contains probiotics. Look for yogurts made with milk from grass-fed cows, and compare the labels for sugar content; it is better to get plain yogurt with no added sugar and add some fruit. If getting enough protein is an issue for you, consider Greek yogurt as well.

For those who choose to include meat in their diet, there are options to choose from. One of the important options is whether to buy processed or unprocessed meat. Processed meats have been shown to be unhealthy in many ways.

There are a wide variety of studies which show the undesirable health effects of processed meat.

A 2005 study showed a link between consumption of cured meats and high blood pressure.

Another study, from 2010 showed a link between processed meat and heart disease.

Processed meat was shown to be linked to a 42% higher risk of heart disease.

Finally, a 2005 study in the Journal of the National Cancer Institute found a positive association between consumption of processed meat and colorectal cancer.

Avoid processed meats as much as possible. The evidence is clear they’re horrible for you.

If you absolutely can’t live without things like bacon and sausage though, at least get them from your local butcher or farmer’s market. They generally use fewer additives and provide healthier options.

Are you worried about the food you’re eating?

Do you need some guidance to help you choose the best foods to fuel your body?

Are you concerned about high blood pressure, cholesterol, or obesity?.

The Mindful Healing Clinic can help.

Contact us today to learn more about our nutritional services.