How Can Naturopathic Medicine Benefit Someone with Autism Spectrum Disorder? 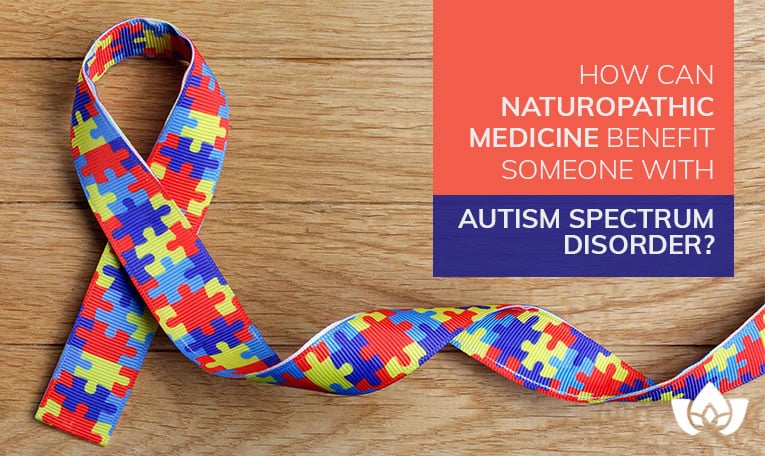 Have you or your child been diagnosed with Autism Spectrum Disorder (ASD)?

Maybe you have a child who has been struggling with sleep, cognitive difficulties, and/or behavioral issues?

Has your child been afflicted with recurring ear infections and a history of taking antibiotics?

You could be wondering how a naturopathic doctor could help.

Keep reading to learn about natural autism support options, and how they can help to alleviate the physical and cognitive symptoms you might find problematic.

To help better understand how naturopathic medicine can benefit someone with autism, we need to understand what autism is.

People who have autism are considered to have a neuro-biological condition, autism spectrum disorder (ASD), which covers a wide group of neurodevelopmental disorders.

Having these challenges can vary from mild to severe.

Many people with autism are able to lead fulfilling lives, while some are faced with debilitating disabilities that present serious challenges.

Children with autism may have behavioral or developmental issues that cause chronic distress/anxiety for the autistic person, as well as their parents.

Your child with ASD could have underlying health issues that could be from nutritional deficiencies, suffer unknown food allergies or may have been exposed to environmental pollutants.

The signs of ASD in young children can be seen as early as 1, but typically, they are diagnosed after the age of 3.

These are some signs that fall under the autism spectrum disorder:

We don’t yet know the root cause of autism.

However, what is clear is that race, ethnicity, and socioeconomic background have no bearing on it.

We do know some risk factors, though. They include:

What Is an Autism Spectrum Disorder?

Autism used to be considered a singular disorder but is now considered to be under the term autism spectrum disorder (ASD) because of the wide variation in the type and severity of the symptoms.

If you or your child has an ASD, you might be diagnosed with one of the following individual conditions:

People with Asperger’s syndrome often have issues with social cues and communication but are generally quite intelligent and independent.

Autistic disorder is considered to be the further end of the spectrum – where symptoms are more intense.

This is a rare disorder, where between the ages of 2-4, neurotypical children lose their social, mental, and language skills. Sometimes they can develop a seizure disorder.

So, how can naturopathic medicine help?

Navigating the immense amount of information on autism spectrum disorders can be intimidating and overwhelming, but I’m here to help.

I’ll work with you to help to sort through it all and recommend naturopathic treatments to help alleviate autism symptoms.

Continue reading to see some services The Mindful Healing Clinic can offer you:

It can be difficult to know what foods to eat, and to understand the impact of these foods on our health or behaviors.

If you have a child with ASD, they could be suffering from food sensitivities, and have nutritional deficiencies.
A National health interview survey found that children with autism were subject to food allergies which could be contributing to the autism symptoms.

Research shows that many children with ASD are more likely to have food allergies and that a gluten and casein free diet as a dietary intervention can prove beneficial.

More research has shown a strong correlation between the level of mineral and vitamin deficiency and how severe the autism symptoms are.

In a meta-analysis of randomized controlled trials it was shown that a deficiency of omega 3 fatty acids might be linked to autism spectrum disorder.

There is evidence that by supplementing omega 3 fatty acids, it can help to ease symptoms in autistic children.

The foods we eat are extremely important for our gut health, however, diets that consists largely of refined sugars and oxidized fats are very common.

Did you know there are trillions of microorganisms in your gut?

Good news is that most are good for your health.

But some of them aren’t.

Excess yeast, or overgrowth of harmful bacteria can lead to health issues.

Frequent antibiotic use in childhood is a risk factor for having fewer good bacteria in the gut because the antibiotics remove both good and bad bacteria.

It is also shown that gastrointestinal symptoms are common in people with ASD and that microbiome-mediated therapies could prove to be an effective safe treatment for people with autism.

As well, people with ASD may benefit from probiotic treatment

Having a diverse microbiota in your gut is healthy. Contact us here at the Mindful Healing Clinic for a gut bacterial analysis that can help understand and explain your current health situation and what possible conditions you’re at risk for.

Research shows that the presence of toxins – such as food additives, preservatives, and pesticides – can have adverse health effects on young children and adults with ASD.

It seems that those with ASD are more sensitive to toxins because they lack nutrients that are needed to help naturally detox chemicals, food additives/preservatives, metals, and pesticides.

Research shows evidence that exposure to environmental toxins can be a cause of ASD in children.

In a study published in the journal Environmental Pollution, researchers list 3 main environmental agents that could be contributing factors to the development of autism in children:

One example of toxic heavy metals is mercury, which can lower your ability to make glutathione – an antioxidant which is produced in our cells which helps to remove toxins from our bodies.

There was a clinical trial published in the journal Medical Science Monitor showing the benefit of normalizing glutathione in repairing oxidative damage.

As well, raising the levels of glutathione in children with ASD may help remove those harmful toxins from the system that can intensify ASD symptoms.

Do you live in an area that could have higher usage of pesticides?

Do you use a lot of BPA plastics?

There is no known cure for Autism.

However, naturopathic medicine therapies can be used as adjuvant treatments for autistic children. Combined with traditional medical/psychotherapy-based approaches, they can help to reduce the severity of your child’s autism symptoms.
The Mindful Healing Clinic is here to help you find solutions..

Book an appointment with The Mindful Healing Clinic and see how naturopathic medicine can help you achieve better health.