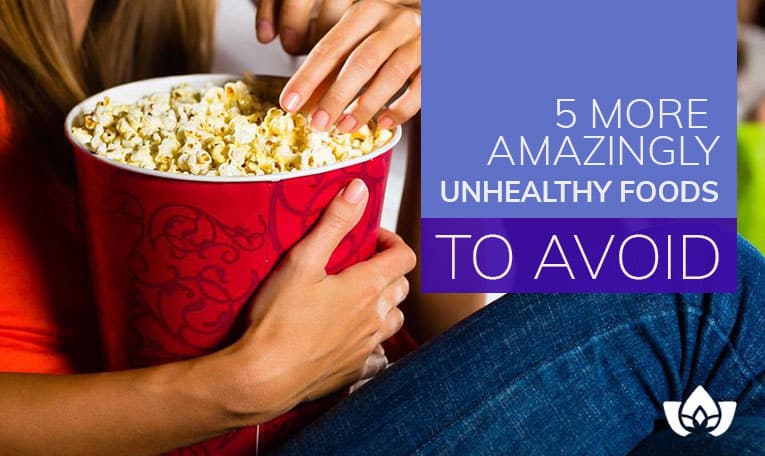 Last time, we took a look at five foods to avoid in order to maintain a healthy lifestyle, and some alternatives to reach for instead.

But there are far more than five foods you should avoid.

As a naturopathic nutritional counselor, it’s my job to help you understand what to eat, and what not to eat.

Today we’re going to look at five more common foods which you may want to reconsider as part of your diet.

Keep reading to find out what they are.

There’s something about going to the movies which makes people want popcorn.

This tasty treat, long associated with theatres, may be a tradition, but it’s a tradition you might want to reconsider.

A small bag can have as much as 225 calories – and that’s without even adding butter.

And even the butter isn’t really butter. Most theatres use a partially-hydrogenated oil made from soybeans. This oil contains about 130 calories per serving and high amounts of trans-fats.

Of course it doesn’t stop there. Most people getting salty popcorn will want something to wash it down with, and the accompanying soda adds much more sugar to the equation. See last month’s article on foods to avoid for more about sugary drinks.

Combine this with the fact that it’s easy to overeat in a dark theatre where you can’t see how much you’re having, and you’re distracted by the film and it’s easy to eat an entire days’ worth of calories in one sitting.

The best option is to bring your own healthy snacks to the theatre. But maybe you forgot, or they caught you in line and made you throw your snack out.

In this case, you’ll probably find yourself at the concessions counter anyways. Recognizing none of the options in a theatre are going to be great for you, some are better than others.

Chewy candies which take longer to eat are a good option, since it’s harder to get through a whole pack in one sitting. Consider options like Twizzlers or Starburst for this reason, but be aware these treats are also high in sugar.

In moderation, cheese is a great food. It contains calcium and protein. But not all cheese is created equal.

Did you know processed cheese slices aren’t allowed to be called real cheese?

Instead they get the label “cheese products” because of the chemicals, additives, and preservatives they contain.

This one is pretty simple. When you want to eat cheese, stick to real cheese, including feta, mozzarella, and cottage cheese.

If dairy is a concern, there are many vegan options on the market. They’re getting better and better as well, as more people seek to include less dairy in their diets.

If it’s calcium intake on your mind, there are lots of non-dairy options. These include leafy greens such as kale and spinach, or foods like almonds, tofu, and oranges. 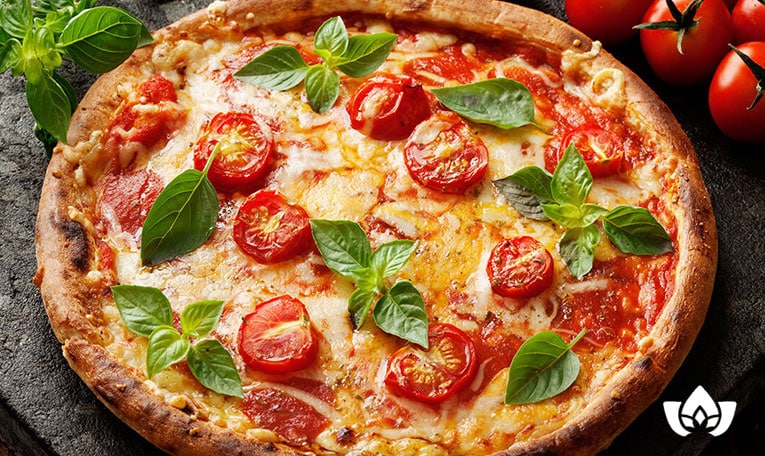 You may have heard that pizza is the perfect food. After all, it contains all the major food groups – breads, dairy, meat, and veggies.

Many people are proponents of cold pizza for breakfast. And let’s face it, it’s a quick and easy meal when you’re in a rush.

But pizza isn’t everything it’s cracked up to be.

Most pizza dough is made from white bread. It ranks high on the glycemic index.

This is a value which is given to food based on how quickly they increase blood sugar levels. The higher a food is on this index, the faster it releases sugar into the bloodstream.

Increased levels of blood sugar over a long enough timeline can lead to blindness, kidney failure, and increased risk of cardiovascular disease.

Additionally, for those with diabetes, this increase in blood sugar can result in not having enough insulin available.

Don’t panic – you don’t have to give up pizza altogether.

Look for restaurants which offer higher quality and healthy ingredients, such as a whole wheat crust.

More and more people are trying to avoid gluten these days. And that’s not a bad thing.

Whatever the reason, gluten-free lifestyles are on the rise. Along with them, is the sale of gluten-free snacks.

Gluten isn’t the only bad thing in junk food. You might take it out, but that doesn’t make it healthy.

These alternatives are often filled with refined grains and high in sugar. As a result, eating them can trigger spikes in blood sugar. They’re also often low in nutrients.

Also, gluten serves as a binding agent. It holds your bread and cookies together. That’s why gluten-free buns are often so crumbly.

But when you take the gluten out, you have to replace it with something. Usually, that ends up being either potato starch or tapioca starch. And these aren’t great options either.

If eating gluten is an issue for you, look for naturally gluten-free foods.

So you know sugary drinks aren’t the best choice, and maybe you’re thinking “I’ll just drink diet soda instead”. Not so fast.

A 2017 study in the journal Research in Nursing and Health found subjects who consumed diets high in aspartame to be more irritable, and show more signs of depression.

Do you think trading out your regular pop with a diet version will help you lose weight?

A 2017 study in the Canadian Medical Association Journal found no evidence that diet soft drinks had any effect on weight loss.

Feeling thirsty? Stick to low or no sugar options such as water, coffee, or tea. If you crave something bubbly, sparkling waters can be a great choice.

Are you trying to eat healthier? Are you dealing with food restrictions which make meal-planning tough? Or are you concerned about high blood pressure, cholesterol, or obesity, in yourself or a loved one?

The Mindful Healing Clinic can help. Contact us today to learn more about our nutritional services.