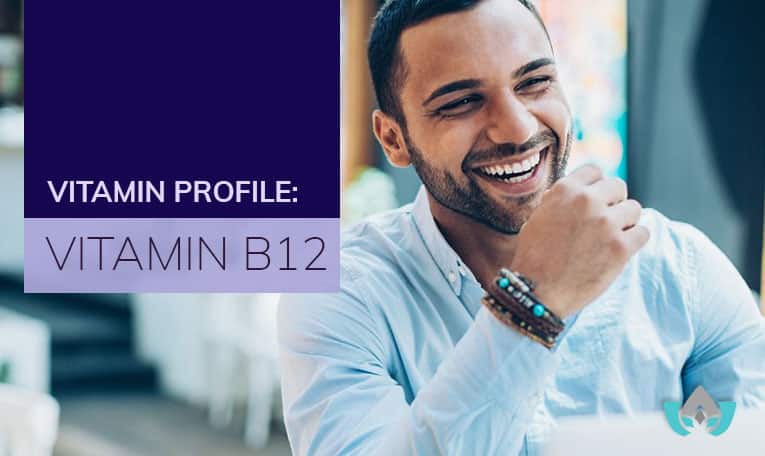 Making sure you get enough vitamins can be confusing at times.

There’s so many different types of vitamins, and then when you get to the “B” vitamins there’s even more variety.

For the last few months, we’ve been looking at the B complex of vitamins. The last one was on the benefits of vitamin B9, but today we’ve reached the end of the road.

It’s time to take a closer look at the last B vitamin in the list, vitamin B12.

Vitamin B12 is a water-soluble vitamin which can occur in some foods, but also may be taken as a supplement or sometimes even prescribed by a doctor, however it cannot be produced by the body.

It has a number of functions related to forming red blood cells, neurological functions, and synthesizing DNA.

Let’s take a closer look at some of the benefits of B12.

Benefits Of Vitamin B12

The list of benefits of vitamin B12 is impressive. The ones we’ll look at today are supported by science, and can have huge impacts on your life if you’re deficient in B12.

Vitamin B12 can help facilitate the body’s absorption of iron.

Iron is critical for healthy growth, and deficiency of it results in anemia.

Iron deficiency has also been linked to low IQ and poor performance at school and work.

A study of over 2,500 adults showed those with a vitamin B12 deficiency were also more likely to have a lower than normal bone mineral density.

Low bone mineral density can result in bones becoming delicate and fragile over time, and an increased risk of osteoporosis.

A study from 2000 in the American Journal of Psychiatry showed a link between low B12 levels in depressed subjects.

Those with a vitamin B12 deficiency were 2.05 times more likely to be severely depressed than those with normal levels of B12.

Vitamin B12 is critical for helping your body produce red blood cells.

Low B12 levels can result in reduced red blood cell production, and the ones which do develop may not develop properly.

When there is a B12 deficiency, red blood cells can become larger than normal, and oval in shape, instead of round.

This causes them to be unable to enter your bloodstream, which means you won’t have enough red blood cells to transport oxygen to your organs.

A 2009 article in the journal Pediatrics showed mothers of children with neural tube defects were more likely to have low B12 levels.

Those with concentrations of 250 ng/L or less were at the highest risk for these complications.

It is recommended that prospective mothers have vitamin B12 levels of at least 300 ng/L before becoming pregnant.

In 2016, a study in the Journal of Alzheimer’s Disease showed that in people with mild cognitive impairment, treatment with B vitamins lowered the rate of clinical decline.

B12 may play a role in preventing brain atrophy and neuron loss, which are causes of dementia.

Other benefits of vitamin B12 include:

How would you know if you are deficient in vitamin B12?

Possible signs you’re lacking in this vitamin include:

You may also experience neurological symptoms such as numbness and tingling in the hands and feet, difficulty maintaining balance, confusion, depression, and memory loss.

In infants a B12 deficiency can mean developmental delays and failure to thrive.

Dietary Sources Of Vitamin B12

Vitamin B12 is found in animal products such as:

It is generally not found in plant-based foods, however, fortified foods such as breakfast cereals and milk alternatives are available for vegetarians.

It can also be found in some nutritional yeast products.

Are you concerned about your levels of vitamin B12, or any other vitamin?

The Mindful Healing Clinic is here to help.