Having Trouble Focusing? Here’s What Might Be Causing It 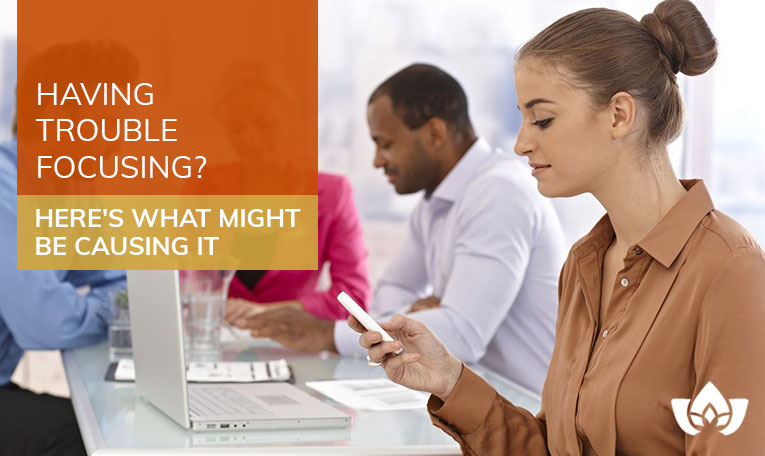 We’ve all had days where we couldn’t focus on work.

Perhaps you’ve found yourself trying to read an important document, only to realize you’ve been re-reading the same sentence over and over again.

Or you try to get started on a particular task only to find yourself constantly distracted.

Seeing as how difficulty concentrating is one of the side effects of stress, you may have been feeling more unfocused than usual this year.

Because – let’s face it – 2020 has been a more stressful year than normal.

Sometimes we refer to difficulty focusing as “brain fog”.

Keep reading to learn more about what brain fog is, and what might be causing it.

What Is Brain Fog?

Also known as mental fatigue, mental fog, or, clouding of consciousness, brain fog is defined by:

There are a number of potential causes of brain fog.

Let’s take a closer look at some of the conditions it can be associated with.

The foods you eat have an important effect on how you feel.

Eating foods you have an allergy or intolerance to can result in a number of side effects, including brain fog.

Common food allergies which may result in brain fog include:

Not getting enough of certain nutrients can also affect brain function.

In particular, vitamin B12 deficiency may result in dementia, depression, paranoia, and sometimes irreversible neurological damage.

You probably know what it feels like to not get enough sleep.

When this happens, you feel slow and sluggish, and your reactions aren’t as quick as when you’re fully rested.

If this happens once in a while, most of us can push through, perhaps with the help of an extra coffee or two.

However chronic insomnia or lack of sleep can have long term effects and interfere with your health and relationships.

Risk factors for insomnia include:

Everyone will experience some stress in their lives – and at times it can even be beneficial.

During the stress response, your body releases hormones which help get you ready to respond to situations by increasing your heart rate and breathing in order to send more oxygen to the body.

If the stress response doesn’t subside when the stressor is gone, however, it can result in symptoms which affect your overall health and well-being.

The physiological effects of stress affecting concentration include headaches,depression, and insomnia.

Stress can also lead to mental fatigue which makes it difficult to concentrate.

Changes in hormone levels can result in difficulties with memory and concentration.

For example, during pregnancy, levels of progesterone and estrogen increase, and this can cause what is sometimes referred to as “pregnancy brain”, memory issues and short-term cognitive impairment.

On the other side, lowered estrogen levels during menopause can have the same effects.

Some ways to counteract the memory issues which come with menopause include:

Brain fog is a side effect of many pharmaceuticals on the market.

These are just a few examples of drugs which can cause difficulty concentration – always be sure to read any warning labels on your medications and be aware especially if they note that they can cause drowsiness.

Fibromyalgia is one of the world’s most widespread causes of chronic pain.

Those with fibromyalgia often experience fatigue and heightened pain response.

Another side effect is brain fog, specifically memory difficulties, and confusion.

The reason for these side effects is unknown, although it may be linked to nervous system disruptions which in-turn affect blood flow to the brain.

Book An Appointment At The Mindful Healing Clinic

Are you experiencing difficulty concentrating?

Having trouble remembering even simple things?

Are you worried this might be the side effect of a larger issue?

I’m Dr. Maria, a naturopathic doctor in Mississauga, and I’m here to help.

I’ll help you get to the bottom of your brain fog – figure out what is causing it and offer natural solutions which get to the root of the problem.